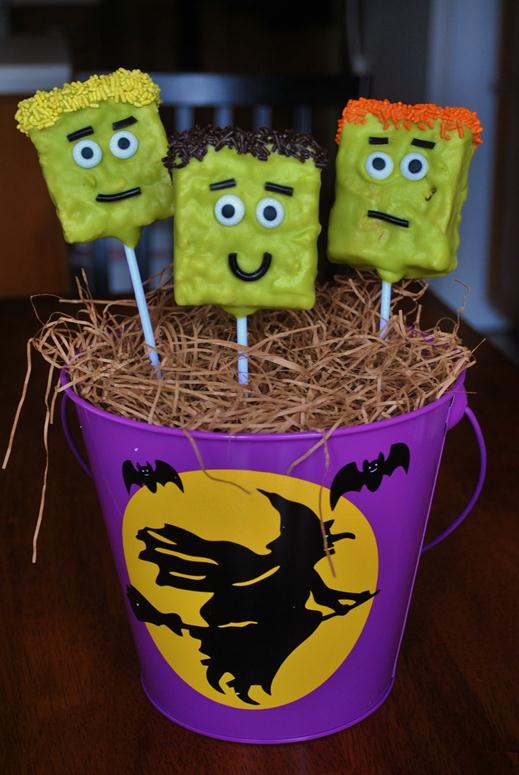 Watching TV while home alone during the month of October is a big mistake. Big. HUGE. Every year, around Halloween, I suffer from a temporary case of Alzheimer’s, where I forget how much I hate horror movies. I am a worrier by nature, with a very active imagination, so after I finish watching a scary movie I turn into this pathetic panicked 30-year-old woman who is convinced that JAWS is going to bite off her toes if she hangs her feet over the edge of the bed. I also check behind the shower curtain before I go to bed. I’m not exactly sure what my game plan would be if I found someone hiding back there, but I’m thinking it would involve a toilet brush to the groin and reed diffuser oil in the eyes. I bet patchouli stings like a bitch.

Of course, after I watch the scary movie and it dawns on me that I don’t enjoy seeing someone saw their foot off, I then have to endure commercial after commercial showcasing newer and scarier movies coming to a theater (and nightmare) near me. I usually spend the last half of October curled up in a blanket at night praying that the Charlie Brown Thanksgiving commercials will start sooner than they did last year.

What’s NOT scary is my 99% failure free experience making treats on a stick! The last time I tried to put something on a stick the process and results were not pretty, but I learned from that experience. As a result, I made some pretty cute Frankenstein’s Monsters out of Rice Krispie Treats! My mother-in-law is throwing her annual Halloween party later this month and we’re planning to set up a station where the kids can make these as party favors. I thought I would try them ahead of time so I could work out all the kinks. 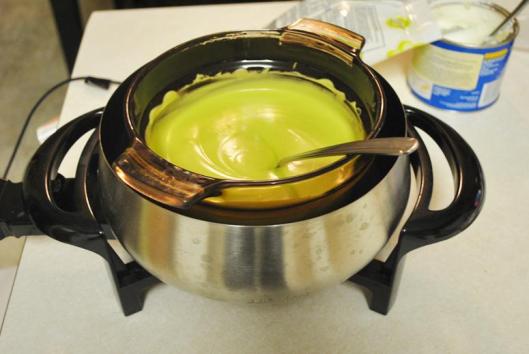 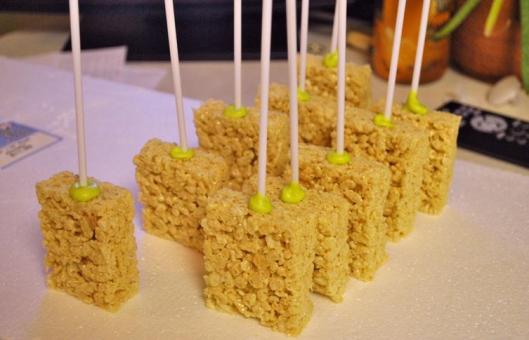 Once you make your Rice Krispie Treats (RKTs) take them out of the pan and cut into rectangles. Dip sticks into melted chocolate and stick into bottoms of RKTs. At this point I let the chocolate set up and then dipped the first one in the melted chocolate. That didn’t work out too well. The chocolate was so warm that it started to melt the marshmallow binding on the treats and everything started falling apart. I cursed…LOUDLY. 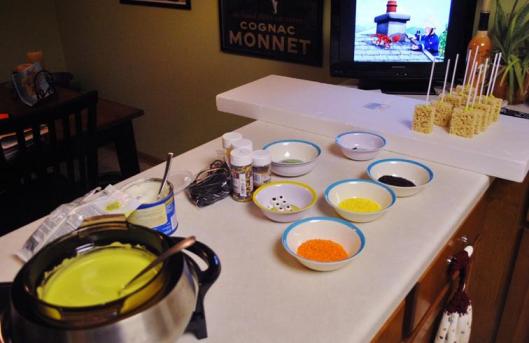 I then decided to put them in the fridge for about 20 minutes. I took them out, one at a time, dipped in the chocolate, tapped on the side to remove the excess, decorated accordingly and then laid flat on a cookie sheet lined with wax paper. BAM! Worked like a charm! Since you don’t have to worry about the back of the treat, laying them flat works much better than sticking them upright in Styrofoam. That way there’s no dripping chocolate or decorations sliding around. And yes, that is Fireman Sam on TV. The little guy was in bed (another lesson learned the hard way), but his DVD was on a continuous loop. “I don’t have time for any of your shenanigans, Norman. It’s Fire Prevention Day!” 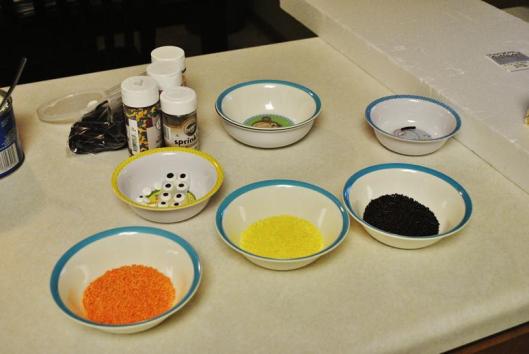 The candy melts came in the light green color from Target, but you could use white candy melts and some green candy coloring (do NOT use regular food coloring or the candy melts will seize!) to get a similar effect. I used jimmies for the hair, candy eyes from the local baking supply shop (Vanilla Bean) and black cherry licorice rope for the mouth and eyebrows (also from Target). Easy peasy. 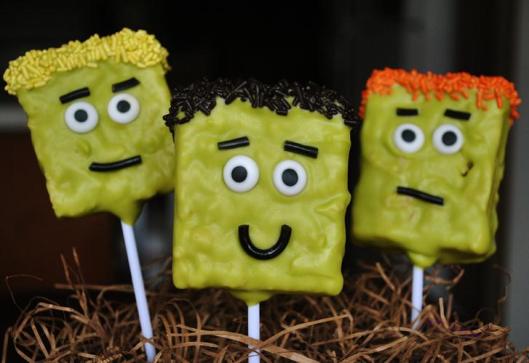 The Gingy in the back doesn’t look very happy. It’s not because he’s a monster, it’s because he’s a Gingy. The blond one looks kinda full of himself, doesn’t he? Typical.

Frankenstein Rice Krispie Treats
From the Rolling Sin Kitchen
Yield: 15 (Note: They are very sweet, so you could make them smaller and make more of them!)

2. Remove treats from pan and cut into rectangles. Melt chocolate, dip ends of sticks into chocolate and push into treats. Place treats on wax paper lined cookie sheets and put in fridge to chill for 20 minutes.

3. Remove treats one or two at a time and dip in chocolate. You can use a spoon to help cover the treats if your chocolate bowl isn’t deep enough. Tap excess on side of bowl.